Outbreaks of Covid-19 at slaughterhouses are occurring in a number of countries around the world, in a development that may have long-term implications for food supply systems, say experts.

The US has been hardest hit, with outbreaks at more than 180 meat and processed food plants. But other countries with highly consolidated meat supply chains – Ireland, Spain, Australia, Germany, Brazil, Canada and the UK – are also struggling.

“Workers are having to go back to work, and farmers are having to euthanise their animals,” said Ben Lilliston of the Institute for Agriculture and Trade Policy. “It’s a very chaotic, crazy situation.”

The reasons for the outbreaks are said to be a combination of crowded working conditions, workforces that are often made up predominantly of migrant workers living in communal housing, and the fact that plants have remained open during the crisis.

The problem is particularly acute where large companies dominate the industry, as has increasingly been the case. Many small slaughterhouses have been shut down over recent years in favour of fewer but larger plants that may have thousands of workers, leading to what one observer called “the most narrow bottleneck in US agribusiness”.

In the short term, the issue is causing instability in the supply chain, with panic buying of meat in the US and the euthanisation of millions of farm animals. Questions are being asked about the risks to workers of infection and even death. In the long term, the problems will raise questions about stability and lack of resilience in the current system, which is dominated by a handful of vast international companies including Cargill, JBS, Smithfield and Tyson.

In the US there have been almost 5,000 cases and at least 20 deaths among meat plant workers as of the end of April. The Midwest Center for Investigative Reporting says there have now been more than 10,000 cases linked to meat plants. Difficulties with physical distancing and hygiene, and crowded living and transportation conditions, are listed as potential risk factors by US health officials.

More than 20 meat plants have been closed in recent weeks, and one outbreak alone – at the Smithfield pork plant in South Dakota – saw more than 850 confirmed cases. Workers may have continued to work while feeling ill due to economic insecurity, health officials said. Tyson poultry workers were being offered a $500 bonus to continue working. 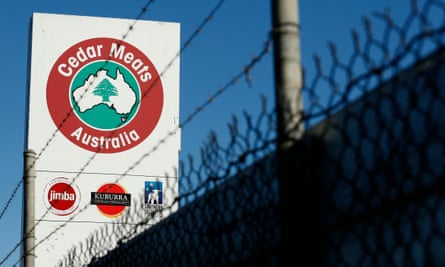 In Germany there have been more than 300 confirmed cases at the Muller Fleisch plant in Birkenfeld. The owners called it the “most serious crisis” in the plant’s history. The communal living spaces for the largely migrant workforce have been partially blamed.

In Canada, 949 cases have beenconfirmed at an Alberta meat packing house owned by Cargill, in the largest outbreak linked to a single facility in the country. In Australia, approximately 70 cases have so far been confirmed at Cedar Meats in Melbourne, which has been shut down for deep cleaning. Prosecutors in Brazil are currently trying to close down plants – including some run by JBS and BRF – where cases have been detected. Cases have been confirmed at nine plants, according to a government report seen by Reuters, which stated that more than 16,000 people may have been exposed.

In Spain, there has been a row at Litera Meat in Binefar, Aragon, about the number of workers who have the virus. Initial serological tests were positive for about 200 workers. The management have carried out subsequent tests on 284 workers to see if they are currently carrying the virus and had 11 positive results.

Plants in Ireland have also been hit hard. Official figures show outbreaks at ten plants with more than 560 workers affected. Outbreaks were reported at Liffey Meats in Cavan and Kepak plants in Roscommon and Longford. More than a third of the workforce – 120 workers in all – at the Rosderra pigmeat plant in Co Tipperary reportedly tested positive for the virus, while last Friday Dawn Meats closed its plant in Westmeath following positive cases. 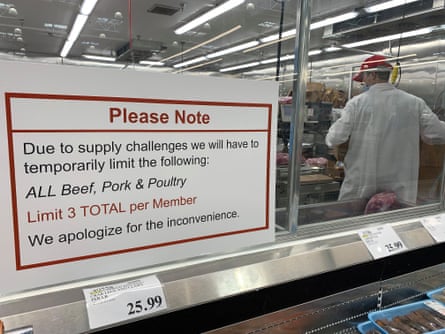 “We are seeing the results of years of meat industry consolidation and vertical integration aimed at increasing profits through efficiency and low wages,” Marion Nestle, professor of nutrition, food studies and global health at New York University told the Guardian, “regardless of effects on animals, workers, and the environment. Covid-19 reveals the costs to workers crowded together under already dangerous working conditions in jobs that often lacked sick leave and healthcare benefits. These are all problems dating from the early 1980s when the shareholder value movement forced corporations to have profit as their sole goal.”

“I think it’s woken up a lot of people about how consolidated this system is, and how it is not very resilient, it’s really vulnerable,” said Lilliston. “People asking about food security in the US is kind of new. There is also a greater awareness of worker rights – the lack of power, working tightly packed together, the lack of government enforcement and inspection. I think there is going to be some fallout but whether action will be taken remains to be seen.”

“It is clear that centralisation of processes into fewer and fewer centres, coupled with just-in-time supply chains, leads to a lack of resilience,” said Prof Tim Benton, research director for emerging risks at Chatham House, a London thinktank. “It’s not so easy to draft in a slaughterman off the street than to pull in casual labour into supermarkets or even farming.”

The Guardian contacted all the companies named above. Cargill, JBS, Tyson and BRF detailed the significant work they are doing to deal with these issues including, in the case of JBS, working with physicians specialising in infectious diseases to develop a protocol, and, in the case of BRF, working with a global consultancy that specialises in risk management. Tyson has put aside $120m to give its workers “thank you bonuses”. All four said that they are carrying out special measures in their plants to protect workers, including distancing, staggered breaks, keeping vulnerable workers home and distributing face masks.

Cargill pointed out: “We are also sensitive that farmers and ranchers need a place to move their cattle. This is a difficult balancing act facing our entire industry … We recognise farmers and ranchers rely on the global food system to earn their livelihoods, so it is critical we keep the market moving – for the farm economy and for the people and animals who rely on us for their food and nourishment.”

Litera Meats told the Guardian it is focused on keeping workers safe, and that “good sense, caution, collaboration and understanding” are the principles guiding the response. Liffey Meats said that the health and safety of workers was its priority.

Get Started With Bitcoin

- March 24, 2020 0
The coronavirus pandemic could wipe out populations of chimpanzees, gorillas and orangutans, leading scientists have warned. Our closest living relatives, which share about 98% of...

Coronavirus shows us it’s time to rethink everything. Let’s start with education | George...

- May 12, 2020 0
Imagine mentioning William Shakespeare to a university graduate and discovering they had never heard of him. You would be incredulous. But it's common and...

Why Philanthropy Is Good for Business?

- May 30, 2020 0
Some small businesses and other corporate entities have figured out a great way to add...

‘A manatee is worth more alive’: the mission to save Africa’s sea mammals

- March 23, 2020 0
It is a blistering day in the Senegalese coastal town of Joal and a group of biologists are standing in a motorised dugout canoe,...

- May 29, 2020 0
Large heath butterflies are returning to peatlands in greater Manchester 150 years after they went locally extinct. The acidic peat bogs and mosslands around Manchester...
All rights reserved www.thepatrioticinfowars.com