‘ve moved back to my parents’ farm in Sevenoaks, Kent, after an absence of 10 years. Old school photos hang on my bedroom wall, my dad still has a fax machine, the radio in the kitchen is 1.5ft long and the freezer is full of meat. Veganism is off the menu.

Like many children, boredom was a familiar foe growing up. Two of my brothers, now in their 30s, have moved back home too, and we have to look to each other for entertainment. We’ve dusted off board games – last week we played Catan every evening – and have familiar arguments about who helps out the least around the house.

I spent much of April sitting in the shed by the pond, hot-spotting from my mobile data. Wifi only works in two rooms in the house, and as the youngest, I’m last in the pecking order. The shed unexpectedly proved to be the best office going – I enjoyed the distraction of 30 greylag geese battling it out for top nesting spots on the island. Cumbersome aerial bombings, hissing and a lot of flapping were all part of a day’s entertainment.

Before long, my brother Inigo, who is doing a master’s degree in biodiversity at the University of Edinburgh, had moved into the garden hut too. We decided to do little videos of the geese and other animals on the farm – great spotted woodpeckers, chiffchaffs and toads were among our first – all inspired by what we could see and hear around our new workplace. 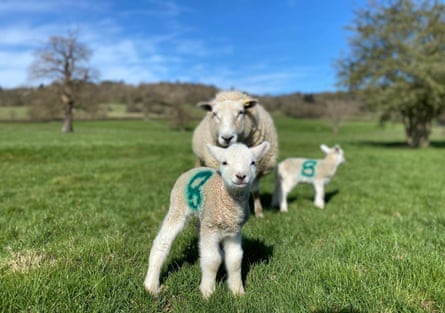 Spring on the farm during a pandemic is much the same as every other year – lambs and calves are born, and the pond, woodlands and hedgerows are swollen with life. David Attenborough documentaries are nature’s Hollywood – real life requires more patience and lacks glamour, but the stars are just as interesting.

Greylag geese partner for life (they can live for 20 years) and I admire how fiercely protective they are of one another. At the end of last month the first goslings appeared – the cherubs of the winning pair.

In May, we noticed the first swallows snatching gulps of water from the lake. They migrate thousands of miles from sub-Saharan Africa to raise their young on our little farm, which has plentiful nesting spots in the rafters of the barns. Those that do make the perilous journey over the Sahara often use the previous year’s nest after doing a bit of DIY before settling down again.

We get about 20 pairs of swallows each year, and it’s important that the farm attracts as many insects as possible to sustain their high-energy parenting. The cool English summer provides the perfect nursery for fledglings, and if conditions are right they’ll produce two or three broods. We made a video using time-lapse footage of the birds diving in and out of the old stables while feeding their hungry chicks with insects they’d caught on the wing.

With the help of higher-level stewardship subsidies from the Department of Farming and Rural Affairs (Defra) my parents can better manage the farm for wildlife – such as leaving rough field margins, bushy hedges and forgoing chemicals. Motion-sensor cameras help us work out which animals are doing well in which habitats. We were surprised last month to see two kestrels had moved into one of our barn-owl boxes and are very happy with our footage of the pair devouring a vole.

Some of the most interesting animals are active at night. There is a badger sett at the top of the hill. We never see badgers (who are most active after dusk and before dawn) so we put the camera up there so we could watch them larking around. It was lovely hearing the dawn chorus at 5am just when they were hunkering down after their night’s work. We enjoyed a cameo appearance from a mischievous fox cub, the belching of a toad and hooting tawny owl.

My parents brought this farm 35 years ago. For my mother, it’s a landscape of loss. She says she misses the cuckoos, flycatchers and nightingales, which all used to be frequent visitors but now rarely appear. She’s worried that one spring the swallows won’t return.

When I was younger I took all the wildlife we have on the farm for granted, but now I don’t. We can’t capture everything. I like to think of our videos as the wildlife equivalent of Match of the Day, although we’re still waiting for the viewing figures to reflect that.

Bank of England must do more to secure green recovery from Covid, say MPs

Drexciya: how Afrofuturism is inspiring a memorial to slavery at sea

- August 31, 2020 0
Glacial lakes have grown rapidly around the world in recent decades, according to satellite images that reveal the impact of increased meltwater draining off...

- October 7, 2020 0
The spread of intensive farming is threatening to jeopardise the world's chances of meeting the terms of the Paris agreement on the climate crisis,...

This is my message to the western world – your civilisation is killing life...

- October 12, 2020 0
Dear presidents of the nine Amazonian countries and to all world leaders that share responsibility for the plundering of our rainforest, My name is Nemonte...

Children urged to strike against lack of action on climate emergency

- September 21, 2020 0
Schoolchildren around the world are being urged to go on strike to protest against a lack of action on the climate crisis. Children and their...

- May 21, 2020 0
Dozens of individuals and groups urging states to reopen amid the Covid-19 pandemic have historical financial ties to coal and oil and gas companies...
All rights reserved www.thepatrioticinfowars.com