The global coal industry will “never recover” from the Covid-19 pandemic, industry observers predict, because the crisis has proved renewable energy is cheaper for consumers and a safer bet for investors.

A long-term shift away from dirty fossil fuels has accelerated during the lockdown, bringing forward power plant closures in several countries and providing new evidence that humanity’s coal use may finally have peaked after more than 200 years.

That makes the worst-case climate scenarios less likely, because they are based on a continued expansion of coal for the rest of the century.

Even before the pandemic, the industry was under pressure due to heightened climate activism, divestment campaigns and cheap alternatives. The lockdown has exposed its frailties even further, wiping billions from the market valuations of the world’s biggest coal miners.

As demand for electricity has fallen, many utilities have cut back on coal first, because it is more expensive than gas, wind and solar. In the EU imports of coal for thermal power plants plunged by almost two-thirds in recent months to reach lows not seen in 30 years. The consequences have been felt around the world as well.

This week, a new report by the US Energy Information Administration projected the US would produce more electricity this year from renewables than from coal for the first time. Industry analysts predict coal’s share of US electricity generation could fall to just 10% in five years, down from 50% a decade ago. Despite Donald Trump’s campaign pledge to “dig coal”, there are now more job losses and closures in the industry than at any time since Eisenhower’s presidency 60 years ago. Among the latest has been Great River Energy’s plan to shut down a 1.1-gigawatt thermal plant in North Dakota and replace it with wind and gas.

Rob Jackson, the chair of Global Carbon Project, said the pandemic was likely to confirm that coal will never again reach the global peak seen in 2013: “Covid-19 will slash coal emissions so much this year that the industry will never recover, even with a continued build-out in India and elsewhere. The crash in natural gas prices, record-cheap solar and wind power, and climate and health concerns have undercut the industry permanently.”

Records are falling thick and fast. By Friday, the UK national grid had not burned a single lump of coal for 35 days, the longest uninterrupted period since the start of the industrial revolution more than 230 years ago. In Portugal, the record coal-free run has extended almost two months, the campaign group Europe Beyond Coal recently reported. 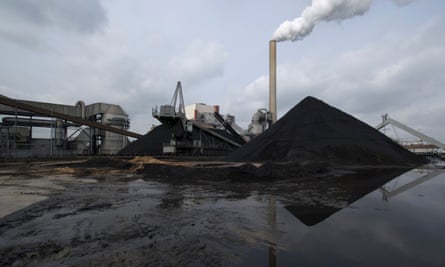 Last month Sweden closed its last coal-fired power plant, KVV6 in Hjorthagen, eastern Stockholm, two years early because the mild winter meant it was not used even before the pandemic. Austria followed suit with the shutdown of its only remaining coal plant at Mellach. The Netherlands said it would reduce the capacity of its thermal plants by 75% to comply with a court order to reduce climate risks.

More importantly, in India – the world’s second-biggest coal consumer – the government has prioritised cheap solar energy rather than coal in response to a slump in electricity demand caused by Covid-19 and a weak economy. This has led to the first year-on-year fall in carbon emissions in four decades, exceptional air quality, and a growing public clamour for more renewables.

Elsewhere in Asia, the picture is mixed. A few years ago, Indonesia, Vietnam and the Philippines were expected to be the industry’s biggest growth areas, but the pandemic, falling renewable prices and a growing divestment campaign have put several major coal projects on hold. South Korean president Moon Jae-in has been re-elected on a pledge to phase out domestic coal use, and many in his ruling coalition are pushing to end financing of overseas projects. In Japan, the big three commercial lenders and the governor of the Japan Bank of International Cooperation have recently said they will no longer accept proposals for coal generation.

Other money taps are also being turned off, as investors and finance houses respond to scientific advice and campaigns by divestment activists and school strikers such as Greta Thunberg.

“The economics of coal were already under structural pressure before the pandemic,” said Michael Lewis, the head of climate change investment research at French bank BNP Paribas. “And coming out of it these pressures will still be there – but now compounded by the impact of the pandemic.”

BNP Paribas is one of a growing list of financial institutions which have chosen to sever ties with coal. The bank said last week that it would accelerate its planned exit from coal financing to 2030 to bring its portfolio in line with the Paris climate goals sooner.

In the same week, the Norwegian sovereign wealth fund – the world’s biggest – ditched a host of coal mining and energy companies, including Glencore, Anglo-American, Vale and AGL over climate concerns. This follows coal blacklisting announcements by BlackRock, Standard Chartered and JPMorgan Chase.

The fossil fuel has fallen from favour in the eyes of many investors due to rising climate concerns, cheaper renewable energy alternatives and a public backlash against air pollution.

“The public health benefits of cleaner air will be front and centre after weeks of lockdown that have prompted blue skies and clean air in Asia’s megalopolises,” Lewis said. “This pressure from the finance sector will only accelerate going forward, pushing the cost of capital for coal projects even higher.”

Even before the pandemic, Australian coal companies said they were finding it hard to find financing for mines and port facilities due to the international divestment campaign. This is not the only economic squeeze. A near-30% fall in the price of thermal coal has made more than half of production unprofitable, prompting several firms to warn of pit closures and layoffs. 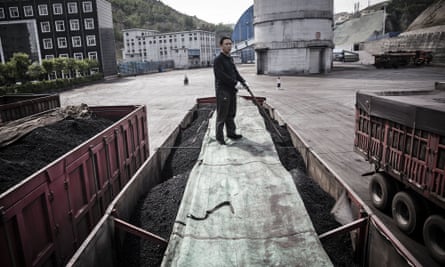 The elephant in the room is China, which burns half of the world’s coal and is the biggest financier of mines and power plants in Asia and Africa – largely to provide an export market for its domestic manufacturing and engineering firms. A few years ago, domestic coal consumption fell, prompting hopes that president Xi Jinping was committed to a shift away from dirty, high-emitting power production. But after the lockdown, the political priority is to jumpstart the economy. Provincial governments are now working on a slew of new thermal plants. But they are running at less than half of capacity because demand for coal has not returned to its previous level.

“Covid-19 has made clear that China and India have built more than they need. Even before the crisis, they had overcapacity. Now with lower demand, you can see everything is a mess,” said Carlos Fernandez Alvarez, lead coal analyst at the International Energy Agency.

Alvarez said coal had been hit hardest by the pandemic, but he cautioned the decline could be temporary unless governments invest in renewables to pull economies out of the lockdown. “We have to look at this structurally. If there is high energy demand again in the future, it will probably be coal that picks up the slack because it is the marginal supplier,” he said.

While nobody is expecting coal to disappear any time soon, Ted Nace, director of Global Energy Monitor, believes the balance has shifted for good. “Coal is definitely on the downturn and this pandemic is going to accelerate that. Demand should come back to some degree next year. But there is a very strong argument that it is not going to just bounce back.”

Lost and far from home, these whales are emblems for our times | Philip Hoare

‘It wasn’t pretty at first’: the Welsh wildlife haven born out of disaster

- February 26, 2021 0
The first assessment of countries' pledges to cut their greenhouse gas emissions in the next decade, a vital component of the Paris climate agreement,...

- April 21, 2021 0
Policy is not sufficiently ambitious and out of line with Paris agreement, say environment groupsA new EU target of a 55% reduction in carbon...

As head of the UN’s climate change agency, I know this year is crucial...

- April 23, 2021 0
Fighting climate change may be the most important task we face today – and the US’s renewed commitment to it is welcomeNearly three decades...

Only one in 10 utility firms prioritise renewable electricity – global study

- August 31, 2020 0
Only one in 10 of the world's electric utility companies are prioritising investment in clean renewable energy over growing their capacity of fossil fuel...

The housing crisis will only get worse under the Tories’ planning proposals | Douglas...

- August 8, 2020 0
The Tories' proposals to overhaul the planning system in England are well-timed, strategically impressive - and utterly disastrous. One of the first big examples...
All rights reserved www.thepatrioticinfowars.com