The South Yorkshire meat processing plant where three workers have died from coronavirus has been criticised for failing to adequately protect workers.

Three workers at a Cranswick food processing facility in Wombwell, Barnsley, which supplies UK supermarkets, are confirmed to have died after testing positive for coronavirus.

The UK-based company, which has annual revenue approaching GBP1.5bn, said there had been nine confirmed cases at the Wombwell plant, with one worker currently in hospital. The most recent confirmed case was on 11 May.

Speaking on condition of anonymity, the family of a worker at the plant said staff had initially been told that social distancing in some parts of the factory was not possible, that they couldn’t wear face masks “because they would be taking them away from the NHS”, and that any staff off sick only got statutory sick pay.

“If you don’t feel well and know if you don’t go to work you’re only going to get the statutory sick pay [GBP95.85 a week] and are not going to be able to pay the bills, what are you going to do? I am scared he could bring it home to us and our kids. They [plant workers] have not been happy, but they’re all scared to say anything because of losing their jobs. It’s a shit way to go for GBP9 an hour [worker is paid GBP9.40 an hour].”

Meat plants across the world are grappling with serious coronavirus outbreaks. The US has been hardest hit, with confirmed cases at more than 200 meat and food processing plants and the death of at least 66 workers. There have also been clusters of cases at meat plants in France, Germany and Ireland, where more than 500 workers have tested positive.

Giving evidence to MPs yesterday, Ian Wright, the CEO of the Food and Drink Federation, said although the UK food sector had not experienced major infection rates, it had seen “a couple of relative hotspots”. Labour MP Geraint Davies said data from the Office for National Statistics up to and including 20 April has found that plant workers in England and Wales were almost six times more likely die from Covid-19 than the average worker.

The family of the staff member said the Wombwell site had not been closed for a deep clean after the workers’ deaths as has been the case in Ireland, and that social distancing was only properly implemented in the canteen area in the past week. “It’s really hard and physical work, the plant has been busier than ever and there’s not a lot of scope for social distancing when they’re on the factory floor.”

The GMB union, which has some members at the Wombwell plant, said it was “ready to work with the company and our members at the site to review operations, and identify any issues that could impact on the safety of our members”. 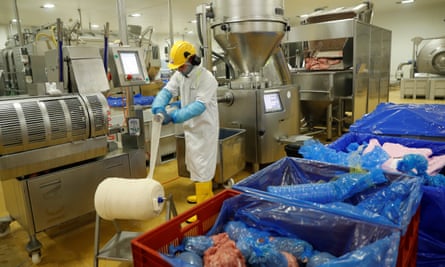 A spokesperson for Cranswick said it had rigorous cleaning procedures ongoing throughout the day and that the plant was sanitised at night. Social distancing had been in place in the plant since the middle of March and, in production areas where a 2m gap between people was not possible, the company had put in shielding screens or provided visors. Staff are entitled to contracted or statutory sick pay depending on their individual circumstances.

The spokesperson went on to say that while the company may initially have said it couldn’t get face masks due to NHS demands, they now had visors available for anyone who wanted to use them. Some canteen seats had been taped off with additional space provided and the company had now started sourcing single-seat tables. Equipment to temperature-check staff was also being installed this week.

“Why are they now implementing things this far into it after the deaths have happened and we’ve had the risk?” said the worker’s family.

Nick Allen, the CEO of the British Meat Processors Association, said the initial guidance provided by the government was “fairly minimal”, but that it had started issuing its own industry guidelines to members at the end of March. “This [social distancing] was something that had not been done before and has been a steep learning curve. There has been a considerable effort to get it right.”

Labour MP Geraint Davies, who sits on the Environment, Food and Rural Affairs committee, said safe social distancing and PPE for all meat plant workers needed to be made legally enforceable. “If you work in a plant and fear for your personal safety, but realise there is a queue of people outside who will take your job now they’re unemployed, you’re left with an impossible choice. The government needs to ensure workers’ safety.”

“From the outset of the pandemic, we have followed all governmental and regulatory guidance, in many cases going beyond the guidelines provided. We have evolved our practices and implemented additional measures to protect our colleagues including social distancing as far as practical, regular deep cleaning at our sites, visors and recommended PPE for all employees in line with the PHE and WHO guidelines.

“All colleagues have been told not to attend work if they, or anyone they live with, have any symptoms. Cranswick employees are designated key workers and are at the forefront of maintaining vital supplies of fresh food into the supermarkets. We continue to do everything we can to protect them while they carry out this critical role.”

We want to hear from you about your experiences and stories from inside the farming industry. Please get in touch. You can contact us at: [email protected].

How to buy shares at the end retracement

- July 22, 2020 0
Stock trading has become a very popular business in today's world. Thousands of investors are making millions of dollars just by taking the trades...

Surely the link between abusing animals and the world’s health is now clear |...

People urged to take rubbish home from parks in England

- August 7, 2020 0
District councils in England are urging people going to parks and green spaces to dispose of their rubbish safely and responsibly, ahead of an...

Here is why we are taking the Australian government to the UN over its...

- August 14, 2020 0
I'd like to tell you about my home, Masig Island. Masig is a coral cay in the Torres Strait Islands, about halfway between the...