The young birder and environmental campaigner Mya-Rose Craig believes the coronavirus lockdown has had a positive impact on the environment. “Wildlife has been doing much better, as it is less disturbed by people, traffic and dogs. We are listening, noticing and looking much more,” she says. “Hopefully, people will continue to do these things now lockdown is easing, which can only benefit nature and our health.”

Craig, who turned 18 in May, is thought to be the youngest person to have seen half of the world’s birds. Yet for the past three months, she has had to content herself with birdwatching on her doorstep, in the Chew Valley, south of Bristol, where she lives with her parents. “We have been really lucky as it is really beautiful here with lots of places to walk from our doorstep,” she says. Her mornings consist of school work done next to a window overlooking the birdfeeders or outside in the garden where she can watch the birds much closer. Afternoons are spent on birdwatching walks.

“The highlights have been seeing 11 red kites above a field, a cuckoo calling from the woods above our house, and a red-necked phalarope at Chew Valley Lake, the first time that one has been seen there,” she says.

But Craig is not just a birdwatcher: she’s also an activist, running nature camps for teenagers to introduce them to the natural world. With RSPB sites beginning to reopen, Craig is passionate that wildlife and nature should play a vital role in the nation’s mental health as lockdown eases.

With new figures showing growing mental ill-health among young people, Craig believes connecting with nature is important as we are part of nature and need that connection to “relax, cope with anxiety and stay mentally and emotionally well”.

For those without access to a garden or park, she says: “There are lots of things you can do to connect with nature through a window – such as watch the sunrise, listen to the dawn chorus, watch the clouds, watch the sunset or the night sky. You can plant herbs in a container and put them on a window ledge, put a birdfeeder and some water somewhere you can see them outside, or just watch any wildlife you can see in trees or bushes.”

Young people from a black, Asian and minority-ethnic background are much less likely to live in rural areas, or have access to urban green spaces. And studies show that Covid-19 affects their mental health more than their white counterparts. Craig, who is part-Bangladeshi, is angry, though not surprised, at the disproportionate impact of Covid-19 on non-white people, especially those of Bangladeshi heritage who have been dying at twice the rate of white people. “I think it is hugely worrying,” she says. “As a family, we have decided to carry on staying at home and my gran is going to carry on totally shielding.”

While she recognises that there are some clinical and socio-economic factors behind these “shocking” statistics, Craig also believes “outright racism” plays a part – that Bangladeshis are too often perceived as “moaners” or “hypochondriacs”. “I have seen this with my grandmother, who is not taken seriously unless she has someone with her who will argue the case for treatment for her,” she says. “Lots of people don’t have an educated or confident family to do that for them.”

Craig has been campaigning for years to improve diversity in conservation work. She got into nature because her parents are both keen birders and says that when she was 13 she noticed that there were hardly any other non-white faces on birdwatching trips. “Being part-Bangladeshi is what made me realise what a lack of diversity there was in the first place.”

So in 2015, she set up a nature camp for 20 teenagers, and the seeds of her not-for-profit Black2Nature were born. So far, she has run nine camps for eight- to 11- and 12- to 19-year-olds. More than 200 children have taken part, and for some it’s the first time that they have seen a cow or sheep except on a plate. The aim of the camps is to encourage community cohesion as well as an introduction to the wonders of the natural world. It’s a “lot more than just birdwatching and mammal-watching”, she says.

But there’s a long way to go. Of environmental professionals, only 0.6% are non-white, the second-worst sector for diversity after farming. The conservation sector has failed to publish or monitor the percentage of its non-white membership, volunteers or trustees. 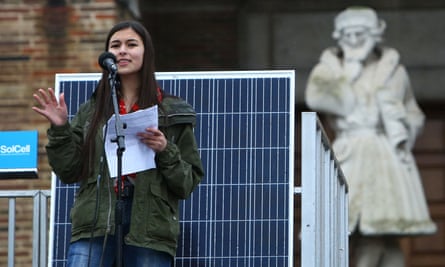 So what does she think of the Black Lives Matter movement? “It’s a really important campaign and one that those of us who are not black need to openly state our support for,” she says. “Black people are being killed and abused in the US and the UK, which needs to stop.

“I think that we need new criminal laws for racially aggravated murder, attempted murder and assault. This needs to be supported with funding to support those being excluded from school and society.”

Craig shared a platform with Greta Thunberg when she visited Bristol in February, and has organised conferences with the celebrity nature lovers Bill Oddie, Chris Packham and the RSPB chief executive, Beccy Speight. As one of the few non-white people in this field, she hopes she can be a role model. “It makes visible minority-ethnic young people think about nature and its possibilities when someone who looks like them is interested in it,” she says.

Growing up, she travelled extensively and says she has “seen first-hand a lot of the impacts of climate change, deforestation and discrimination”, which gave her an interest in conservation and indigenous people.

In 2021, she hopes to to volunteer with birds and indigenous people in the US before going to university to study politics and international relations. She also plans to run eight nature camps and hopes in the future the camps will be able to run without being reliant on her and to expand beyond Bristol.

Locally, Craig says the pandemic lockdown has significantly improved the environment. “The disappearance of people and vehicles has halved pollution in Bristol city centre, regenerated our rivers and, with coal-powered stations shutting down, made our electricity carbon-free. All of these are great signs that we build on.”

With her A-levels cancelled due to coronavirus, Craig plans to have August off to spend time with friends, and then go birding with her parents in Shetland and the Isles of Scilly in the autumn.

Until then, she is still looking for birds in the Chew Valley and beyond.

Family: Lives with her parents.

Education: Chew Valley school; plans to go to university in 2021.

Riverside encounter with an otter family: Country diary, 14 May 1945

- May 11, 2020 0
CumberlandAn ever lengthening line of bubbles beading the stale, still backwater where a tributary enters the main river betokened the movements of an otter...

- July 1, 2020 0
Air pollution is likely to be increasing the number and severity of Covid-19 infections, according to the UK government's expert advisers.In a report published...

- May 19, 2021 0
The locals are divided as energy companies eye the gas resources buried kilometres below the sensitive Queensland floodplain regionRead more of our Modern Outback...

- June 10, 2021 0
Anyone who thought the world had four oceans will now have to think again, after the National Geographic Society announced it would recognize a...

Badger cull extended in England with more than 60,000 in line of fire

- September 7, 2020 0
The government's badger cull is being expanded to 11 new areas of England including parts of Oxfordshire, Lincolnshire, Leicestershire and Derbyshire so that more...
All rights reserved www.thepatrioticinfowars.com