New Guinea is home to more than 13,500 species of plant, two-thirds of which are endemic, according to a new study that suggests it has the greatest plant diversity of any island in the world – 19% more than Madagascar, which previously held the record.

Ninety-nine botanists from 56 institutions in 19 countries trawled through samples, the earliest of which were collected by European travellers in the 1700s. Large swathes of the island remain unexplored and some historical collections have yet to be looked at. Researchers estimate that 4,000 more plant species could be found in the next 50 years, with discoveries showing “no sign of levelling off”, according to the paper published in Nature.

“It is a paradise teeming with life,” said lead researcher Dr Rodrigo Camara-Leret, a biologist from the University of Zurich who was previously at the Royal Botanic Gardens, Kew.

New Guinea – which is divided into the Indonesian provinces of Papua and West Papua and the independent state of Papua New Guinea in the east – is the most mountainous and largest tropical island in the world, with snowcapped peaks reaching 5,000 metres high.

“This allows for different types of habitats, such as mangroves, swamp forests, lowland tropical forests and also montane forests, which have high levels of endemism,” said Camara-Leret. “And then at the very top, just below the limit of plant growth, are these alpine grasslands … This habitat is basically unique to New Guinea in southeast Asia.”

The island sits between Malaysia, Australia and the Pacific and has a young and diverse geological history, with many species forming in the last million years. One of the most surprising discoveries was how many plants are exclusive to the island. For example, 98% of heather species are endemic, as are 96% of African violets and 95% of ginger species. 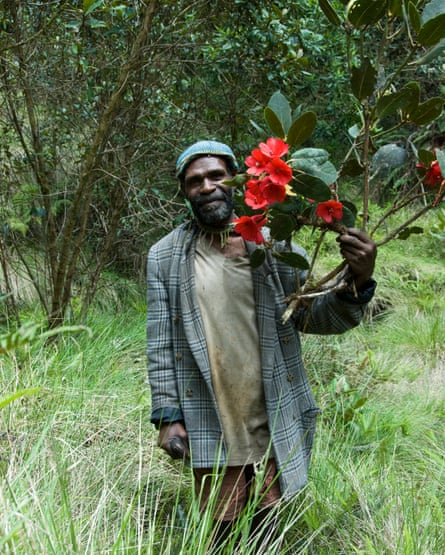 Many suspected that New Guinea would prove to have the highest diversity, but botanical exploration on the island remains limited. Unlike Madagascar – which has had a species checklist since 2008 – the island had never been systematically surveyed and previous estimates suggested it could have anything between 9,000 to 25,000 species.

In total researchers found 13,634 species of plants divided into 1,742 genera and 264 families. “I was just pleased that we could nail a number. This is not the end, this is a first step,” said Camara-Leret, who is encouraging researchers from around the world to build on this dataset, which will be vital for International Union for Conservation of Nature (IUCN) Red List assessments.

New Guinea has fascinated explorers and botanists for centuries. In 1700 Englishman William Dampier brought back the earliest scientific specimens from the region, which inspired decades of European exploration. In 1770, Joseph Banks, who was on Captain’s Cook’s voyage, collected a sedge – one of the earliest known samples to be included in the study. The taxonomy of the region slowly built up, with plants being collected and taken to different institutions around the world.

However, inland areas remained inaccessible until after the second world war and base camps could only be established with the use of aircraft. These mountainous regions proved to be the most diverse and in the past 50 years, 2,800 new species have been recorded.

Botanists looked through more than 700,000 specimens. Included in the finds were more than 2,800 species of orchid and 3,900 species of tree. “Part of the study’s beauty is its sheer scale and just the huge number of collaborators,” said Camara-Leret, who started the project in 2018. “There was already a sense of New Guinea community, but it was scattered, and this project kind of brought us all together.”

Some veteran scientists involved in the study had lived on the island for decades, and many had spent their careers studying the taxonomy of a single plant family. “It united people across different generations, like scientists who are just starting up, then early career researchers and then folks who have been retired for over 20 years. We had a lot of scientists that are retired, collaborating and giving up freely their time … They have an enormous amount of knowledge and very few people are learning it from them,” said Camara-Leret.

Another reason it has taken so long to create a list for the island is because the region has been governed by so many different European powers. Colonial education was focused on extracting materials and agricultural work, so taxonomic knowledge was limited. After independence, there was a new generation of scientists committed to doing research but the system stifled their enthusiasm. 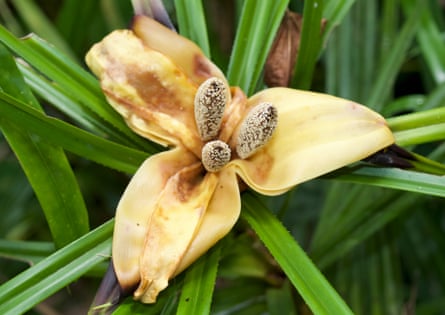 There is only one account written by an Indonesian and none by a Papua New Guinean in this paper. Researchers hope it will encourage the two governments to produce a new generation of botanists who will inform better conservation in the future. But botanical exploration is urgently needed to ensure unknown species can be collected before they disappear.

“It is clear, in the context of the biodiversity crisis, that this paper represents a milestone in our understanding of the New Guinea flora and provides a vital platform to accelerate scientific research and conservation,” said Dr Peter Wilkie from the Royal Botanic Garden Edinburgh, who was involved in the study. “Research at its best is collaborative and this demonstrates what can be achieved when scientists from around the world work together and share expertise and data.”

Dr Sandra Knapp, a botanist from the Natural History Museum who was also involved in the project, described it as an “incredible achievement”.

“This should now serve as a baseline for much more work and discovery in the years to come,” she said.

A natural beauty? How to give your bathroom shelves a green makeover

- October 27, 2020 0
Planned development in Kent risks destroying the only two British habitats of 1cm arachnidA creature able to leap more than 10 times its own...

- April 16, 2020 0
Deer roam through the garden most nights, leaving their prints and grazing choice leaves of daylilies, Hemerocallis, among swathes of poisonous monkshood. The first...

‘For climate protesters, we are like filth’: the German village where coal is still...

Seizing the moment: how Australia can build a green economy from the Covid-19 wreckage

- May 13, 2020 0
There is a growing case that recovery from the coronavirus offers Australia a chance to succeed where it has failed for more than a...

‘Miners out, Covid out’: threats to indigenous reserve in Brazil grow