Analysts at global banking giant HSBC have sounded the alarm over the potential risks of investing in JBS, the world’s biggest meat company, after a string of investigations raising concerns about Amazon deforestation issues in its beef supply chain.

The meat giant “has no vision, action plan, timeline, technology or solution” for monitoring whether the cattle it buys originate from farms involved in rainforest destruction, according to analysis by the bank, which has substantial investments in the troubled meat packing firm.

In a recent financial report on JBS – obtained by the Bureau of Investigative Journalism – HSBC analysts said they had asked the company “multiple times” about its plan to address deforestation but appeared to be unsatisfied, leading them to conclude that “the pressure is on JBS”.

The analysts expressed disquiet that in their view the company had allowed a smaller competitor to take on the mantle of addressing forest destruction, after Marfrig – another Brazilian beef exporter – committed to full traceability of its Amazon cattle by 2025.

“We have never seen a major industry leader default an industry matter this serious to a smaller participant,” the report said. “It is the major risk on JBS that worries us because it speaks to seriousness of purpose on ESG [environmental and social governance] matters for a company that in our view, has something to prove.”

It adds: “There is a valuation benefit that goes with being the largest solution provider to deforestation in Brazil and unfortunately, we don’t see JBS inclined to lead and own that title.”

JBS, which has annual revenues of $50bn (GBP38bn) and slaughters almost 35,000 cattle a day in Brazil, is coming under increasing pressure from investors over its environmental record. The investment arm of northern Europe’s largest financial services group last month dropped the company from its portfolio. JBS is now excluded from assets sold by Nordea Asset Management, which controls a EUR230bn (GBP210bn) fund. 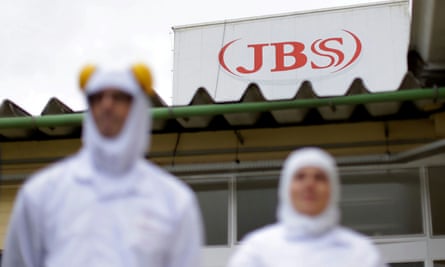 The HSBC report cites a recent investigation by the Bureau, the Guardian and Reporter Brasil revealing that JBS’s trucks had moved cattle from a ranch marked by government data as being under sanction due to illegal deforestation to a “clean” farm, which in turn sold cattle onto JBS abattoirs.

JBS disputed the findings, but did not give a clear explanation of exactly where their trucks had been collecting cattle from. The investigation prompted calls for supermarkets and fast food chains to immediately cease trading with JBS.

HSBC analysts discussed JBS’s recent attempt to split the Brazilian part of its business from its global operations, in order to float the international arm on the New York Stock Exchange with no Amazon risk for investors.

The report also refers to other historical issues. “After its legacy of governance and corruption problems, JBS’s board and senior leadership are in need of proof points that the firm has indeed turned over a new leaf on ESG responsibility matters.”

Despite expressing concerns, the HSBC report does still recommend buying JBS stock. “We like JBS for its debt reduction story, diverse portfolio of proteins, geographic footprint, leadership in the industry and scale. Its proposed [New York] listing would likely improve governance if done correctly, reduce cost of capital and strategically position the company for new growth opportunities.”

HSBC holds JBS shares and bonds worth some $9 million, according to recent research by the NGO Feedback.

HSBC told the Bureau that those holdings were usually held on behalf of other parties and that in such cases the bank had no part in the decision to invest in specific companies.

The bank’s report comes amid global outrage over the fate of the world’s biggest rainforest. The Amazon is a crucial buffer in stabilising the regional and global climate. Experts say its preservation is essential to tackling the climate emergency.

Last year, a study by supply-chain initiative Trase concluded that JBS’s global beef exports were linked to up to 300 sq km of deforestation per year in Brazil.

JBS told the Bureau and the Guardian: “As we are due to report results to our investors and stakeholders later this week, we believe it is good practice to avoid further comments at this time. Thank you as always for your interest in our company.”

Sign up for the Animals farmed monthly update to get a roundup of the best farming and food stories across the world and keep up with our investigations. You can send us your stories and thoughts at [email protected]

- October 15, 2020 0
The UK environment watchdog is examining whether more than 50 sites that supply salad and vegetables to supermarkets and other businesses are discharging chemical...

Why should you choose short-selling?

- May 11, 2020 0
What is Short Selling? ALSO READ: The Lessons That Poker Can Teach You About InvestingShort-selling happens...

The US has a good record on fighting monopolies. Now it’s Google’s turn

- October 25, 2020 0
Sundar Pichai, chief executive of Alphabet, Google's parent company, is a mild-mannered software engineer who is not good at games of verbal fisticuffs with...

Our House Is on Fire by Greta Thunberg et al review – a family...

admin - March 4, 2020 0
A movement born without a face tends to acquire one. Since August 2018, when 15-year-old Greta Thunberg began a solo "school strike for the...
All rights reserved www.thepatrioticinfowars.com