Philip Aiken has received more than 1.4m likes on the video-sharing app TikTok. But his videos don’t feature cute animals and there are no celebrities to be seen. Aiken’s posts are about soil restoration.

The 27-year-old is one of a growing number of TikTok users discussing the benefits of boosting biodiversity in green spaces and gardens against a backdrop of viral sounds. “I see it as like planting seeds, and hopefully that germinates and that person wants to learn more,” says Aiken, known as Phil the Fixer on TikTok.

Millennials and Generation Z are increasingly engaging with environmental issues by creating and sharing memes on social media. The hashtags “moss”, “biodiversity” and “native biodiversity” have 84.3 million, 12.6 million and nearly 800,000 views respectively on TikTok.

The most-viewed biodiversity TikToks poke fun at monoculture lawns, praise the qualities of moss, provide explainers, support indigenous practices and warn of mass extinction. TikTok has around 800m active users worldwide and is particularly popular with Generation Z: an estimated 60% of users were born after the mid-90s. The images and clips go on to reach new audiences when reposted on Twitter and Facebook.

A subculture known as “grass TikTok” – which has gathered nearly 380 million views – has also emerged on the app. Its community interacts with content about plant species. Top creator Evan Phillips, who has more than half a million followers, rates different types of grass and posts pictures of fans’ gardens; he has even brought out grass-themed merchandise.

Aiken downloaded the app in October 2019 after interviewing a group of youth climate activists – who were all talking about TikTok – for his podcast just to save the world.

He regularly receives messages asking about gardening, sustainability and university degree choices, while others exchange resource recommendations in his comments section. Aiken, who is based in the US but studied for a master’s in renewable energy in New Zealand, hopes to become a teacher. “It’s been cool being able to influence the younger generation in that way,” he says.

During lockdown, Aiken also co-founded EcoTok, a collective of young creators aiming to become the environmental “Hype House” (a group of the biggest stars on the app who live and film in a mansion in Los Angeles), as well as the Intersectional Environmentalist Instagram account, which was initially set up after a post by environmental activist Leah Thomas in response to the killing of George Floyd went viral. The Intersectional Environmentalist, which campaigns for an inclusive version of environmentalism, highlighting injustices experienced by marginalised communities, has now gained 121,000 followers, with an audience mainly made up of millennials.

Young-Woong Kee, a 16-year-old Hawaiian high school student, is a keen follower of biodiversity TikToks: “Seeing them and talking about them with my friends has definitely impacted us and made us want to look more into it.”

He has acquired a collection of succulents and hopes other viewers will look more deeply into wider environmental issues. Kee, who has also started watching National Geographic’s YouTube videos and the Netflix documentary series Our Planet, cited coral bleaching, deforestation and overhunting as key issues.

A recent survey of Generation Z and millennials by Deloitte found climate change and protecting the environment was a top concern, both before and during the coronavirus pandemic. This follows the rise to prominence of Greta Thunberg and the growth of Fridays for Future, Zero Hour and Extinction Rebellion over recent years. 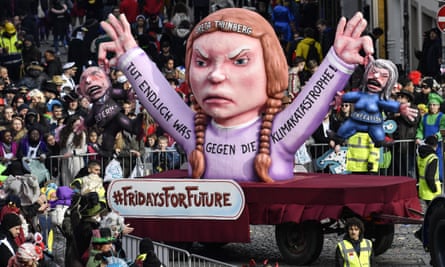 Another EcoTok creator, Casey Shultis, 18, believes lockdown has further increased engagement. “People are sitting at home and now have the time to learn more about biodiversity and the environmental crisis,” he says. “I encourage people to understand the importance of planting native biodiversity while also seeing the beauty that comes along with it.”

Shultis, who is about to start an environmental studies degree in the US, previously called his 62,300 TikTok followers the Greta Gang and hopes one day to have as much impact as Thunberg.

An Xiao Mina, author of the book Memes to Movements, says the full extent of the influence of these platforms will only become apparent by tracking the digital content over time. She highlighted the influence of, for example, #BlackLivesMatter and the Umbrella Movement in Hong Kong. “Often, the most visible thing is the meme,” says Mina. “What may not be apparent is the networks that are being built, the narratives being shaped and the organisational structures that ultimately might help us yield effective change.”

Educators have also been using biodiversity memes to get their messages across in the classroom and lecture halls, while environmental organisations have been attempting to inspire younger audiences on social media, which can ensure the accuracy of information shared. The Royal Horticultural Society’s (RHS) Instagram following grew from 99,500 to 125,000 between April and June. Prof Alistair Griffiths, RHS Director of Science and Collections, says: “It would be wonderful if there were a way for RHS scientific content to be co-created with the key environmental influencers of TikTok.”

However, the potential ban on TikTok in the US over national security concerns looms over creators, and could result in a loss of biodiversity engagement online.

“It would be really unfortunate because TikTok is such a unique platform,” says Aiken. “People are genuinely learning things they never learned in school or from their communities.” But he remains optimistic. “There’s something different about Gen Z. I don’t necessarily think that’s gonna go away with TikTok.”

Wild lynx could be reintroduced into Scottish Highlands

Sweden to build reindeer bridges over roads and railways

‘Individual actions do add up’: Christiana Figueres on the climate crisis

- March 5, 2020 0
Christiana Figueres, the Costa Rican diplomat who was an architect of the worldwide Paris climate agreement, is enraged. She thinks you should be too. She...

How to buy shares at the end retracement

- July 22, 2020 0
Stock trading has become a very popular business in today's world. Thousands of investors are making millions of dollars just by taking the trades...

- October 1, 2020 0
The safety of US meat plant workers is at risk, workers and campaigners believe, because of a triple whammy of increased line speeds, higher...

- July 30, 2020 0
One of the most important things in your life that might make a huge difference is the loans you decide to take. If you...

Jenrick criticised over decision not to block new Cumbria coal mine