The track north-west of Abney is an old one, a packhorse route linking the village of Bradwell with Ashford and points south. Here it reaches its high point before dropping steeply into Bradwell, an exposed spot, often harsh on a winter’s day and sometimes on a summer’s one as well. I found myself leaning into a strong breeze pushing across the moor, shaking the hairgrass and ruffling the yarrow and selfheal growing prettily against a long drystone wall that bordered the trail and offered me some shelter.

Abney Moor is a fine vantage point to consider the endless miles of these “Derbyshire hedges” and how varied they are, in function and form: how in one direction they can seem pleasing and complementary to the landscape, following the rise and fall of steep pasture, like a cast net, and yet in another appear angular and stern, laid ruler-straight with no feel for the ebb and flow of the hillside. 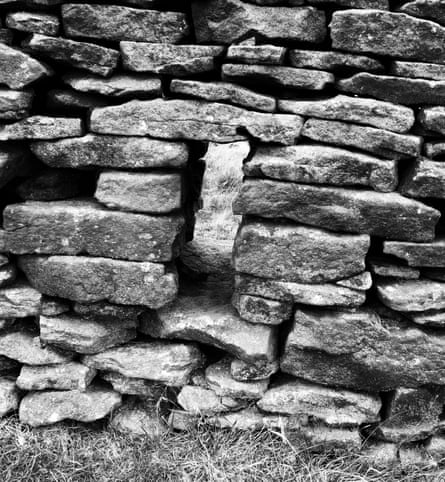 Built into the footing of the one next to me were remnants of a medieval cross that once marked the boundary of three parishes, shown on the map as Robin Hood’s Cross, although originally named for a local baron and not the outlaw. Rather than follow the track down to Bradwell, I cut left here along Bleak Knoll, its crest split down the middle for more than half a mile by an unusually high wall, over six feet in places. And along its length every 15 feet or so, roughly a rod in old measures, a small rectangular aperture had been built into its base a few inches off the ground. It must have been the devil to work in so many of these things, and the obvious question was why.

Holes in drystone walls have a plethora of names that sometimes explain their purpose: “lunky” is common in some parts of the country, “hogg hole” in others, a hogget being a yearling sheep. But these gaps seemed too narrow for all but the youngest lambs to squeeze through. Wallers might also build in a “smuse” or “smoot” hole for rabbits, to trap them as they passed through or stop them burrowing underneath and weakening the structure. This seemed more likely; 100 years ago, a rabbit farm nearby was supplying a London furrier.

Hot houses: the race to save bats from overheating as temperatures rise

‘Outdoors is the best place to be’: readers’ photos of their local wildlife

- February 8, 2021 0
Researchers use drones to map 30,000 sq metres of Heron Island at high resolution so sea cucumbers can be counted“In the wee hours of...

- December 18, 2020 0
Just before the 2008 Olympics, a machine on the roof of the US embassy in Beijing began to tweet air pollution measurements to the...

- October 19, 2020 0
The vast majority of protected landscapes across Europe are rated as in poor or bad condition and vital species and their habitats continue to...

- September 14, 2020 0
When Marven Robinson was a kid, any mention of spirit bears was met with hushed dismissal from the elders in his community, the Gitga'at...

Country diary: chicken-of-the-woods is tasty – and not just to us

- August 1, 2020 0
Woodland fungi are a furtive bunch, living mostly unseen under the soil or inside other organisms, digesting whatever their creeping threads can find: nature's...
All rights reserved www.thepatrioticinfowars.com