Earlier this year, more than 350 elephants mysteriously died in the Okavango delta in Botswana. Individuals of all ages and both sexes were affected, with many walking in circles before dying suddenly, collapsing on their faces. The mass die-off in May and June was described as a “conservation disaster”.

Three months later, most surviving elephants have fled. Last week a plane flew over the Okavango Panhandle, an area in the north-west of the delta where most of the deaths occurred, and eight elephants were spotted, when normally you would see hundreds, says Dr Niall McCann, director of conservation at UK-based charity National Park Rescue. “It is understandable, I’m sure you or I would flee if all our friends and relatives were dying, and that’s what the elephants appear to have done.”

Elephants are now reported to have started dying in a similar way in neighbouring Zimbabwe. At the time of writing, 22 have died, with numbers expected to rise. Dr Roy Bengis, retired chief state veterinarian of the Kruger national park, says testing fresh carcasses in Zimbabwe could be an opportunity to understand what happened in Botswana, although it is not clear if there is a link between the two incidents. “Nowhere do we have anything definitive at this stage. Not that I want another elephant to die but it would be so great to be able to get a very fresh carcass,” he says.

There have been many competing theories about the cause of the deaths in Botswana. Human-elephant conflicts are common in the Okavango delta, an agricultural area home to 15,000 elephants and 16,000 people, but poisoning or poaching are unlikely to be to blame. Cyanide was ruled out because no scavengers died and tusks were left intact, according to a commentary piece co-authored by Bengis in the African Journal of Wildlife Research. Pesticides and anthrax were tested for and also ruled out.

Researchers have been unable to visit the site in Botswana and most samples were collected from animals that had already started rotting. Samples need to be stored under very specific conditions and quickly transported to international labs with specific equipment to be tested – this was not done, resulting in widespread speculation about possible causes. After months of work, scientists have whittled the cause down to two leading theories – neurotoxins in algal blooms or a rodent virus known as EMC (encephalomyocarditis).

Local sources estimate that 70% of elephants in Okavango in Botswana died near waterholes, many of which contained blue-green algal blooms. Toxins from algae were initially ruled out as a potential cause because elephants were the only species to die (with the exception of one horse).

Now experts think elephants could be more vulnerable to algal bloom toxins because they spend so much time bathing and frolicking in water. Their long trunks also have a large number of olfactory receptors and they can drink hundreds of litres of water a day, potentially exposing them to more toxins than other species. 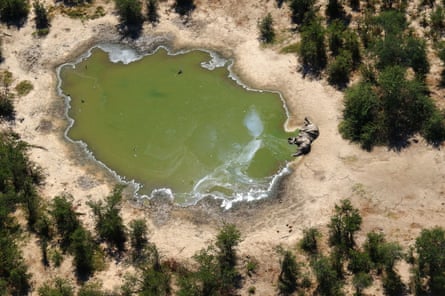 Prof Christine Gosden from the University of Liverpool, who has previously studied the toxicology of chemical warfare, says she felt a responsibility to look into the mysterious deaths after reading the story in the Guardian. Her findings suggest they could be caused by a recently discovered bacterial toxin produced by algae called BMAA (beta-methylamino-L-alanine).

She made the link after reading about the similarities between the behaviour of disoriented whales and dolphins that became beached and died (and tested positive for BMAA in their brain), and reports of elephants walking around in circles before collapsing. “They’re large mammals and they’re showing the same sort of behaviour – they’re clearly lost and disoriented,” she says, describing this connection as a “giant clue”. BMAA has also been found in the brain tissue of people with dementia.

BMAA is mainly found in marine environments (as opposed to fresh water) and many researchers question whether it is found in high enough concentrations to kill an elephant. It could be part of a cocktail of toxins, says Dr James Metcalf, a senior researcher at Brain Chemistry Labs, a non-profit research institute in Jackson, Wyoming, who has looked at cyanobacteria in Africa. “I would not be surprised to find BMAA in the brains of elephants. It may be a contributing factor, but without the testing it’s really hard to say.”

Zebra, wildebeest, white rhinoceros and impala have all died from ingesting toxic algae but there is no literature about elephants dying from neurotoxins in algal blooms. This might be because pathologists and vets do not initially test for cyanobacteria, and once they decide to do so it is often too late because the tissues have deteriorated or the algal blooms have gone.

Rising temperatures and intensive farming methods are fuelling an increase in algal blooms in rivers, lakes, reservoirs and seas around the world. Elephants are naive to this potential threat which makes them vulnerable. “There’s lots of interesting evidence slowly building to suggest that environmental exposure to neurotoxins is having more of an impact on species than we realised. And goodness knows what’s happening with people,” says McCann.

The fact that the elephant carcasses were close to water holes does not mean water was the source of the poison – frequently sick animals seek out water because they are feverish or thirsty.

Farming is widespread on the floodplains of the Okavango delta and this year has seen a bumper crop of maize and sorghum because of late rains in 2020 following a string of dry years. This could have attracted families of elephants to cropland as well an increase in rodents, which defecate and urinate on tufts of grass. This means they would have been in close contact. 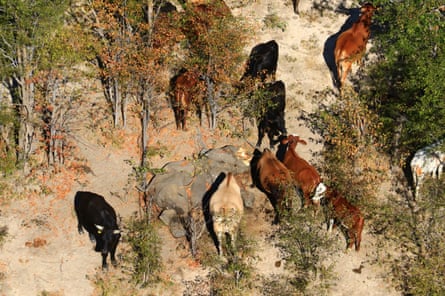 Most grazers eat the leaf part of grass, but elephants grab grass with their trunk and eat the whole tuft (including rodent faeces), potentially exposing them to the EMC virus. Unlike neurotoxins, EMC is a fairly well-known pathogen that most frequently affects elephants in zoos where there are lots of rats – there have been several cases in US zoos and one in Australia. It caused the death of 64 elephants in Kruger national park between 1993 and 1994.

“[In Botswana] there were anecdotal stories that these elephants just dropped stone dead in their tracks – and that fits with EMC. That’s one of the characteristics that we saw in Kruger,” says Bengis.

Like neurotoxins that can kill in as little as 20 minutes, EMC is a quick death that causes elephants to collapse on their feet (although it can incubate for for five to 10 days, so elephants can move long distances in that time). The single dead horse could be a clue – not a coincidence – as horses are also vulnerable to EMC.

Normally there is a sex bias in deaths from EMC – 83% of elephants that died in Kruger national park were adult males – but this was not the case with the Okavango deaths. “The timing of the mortalities is also of relevance as extensive studies in the Seronga area [in Okavango] have identified the months of February to May as peak crop-raiding months,” researchers wrote in the commentary paper. “Crop raiding is not only carried out by males, but by family units predominantly comprising females and young elephants, which would explain the lack of sex and age bias.”

The Botswana government has ruled out EMC because there was no damage or abnormalities found on heart tissue of the animals, but it is not clear how many samples were tested. Authorities have been contacted for comment.

Scientists are keen to solve the mystery to help mitigate future deaths in more isolated, less resilient elephant populations which may be unable to withstand the loss of so many individuals.

Without proper testing, researchers cannot be certain this is not the start of an epidemic. Awareness about the risk of emerging pathogens and the importance of testing disease outbreaks in wildlife is greater than ever. McCann says: “If this is a toxicity situation then there’s the possibility of it spilling into the human population.” Authorities are being urged to test fresh samples from Zimbabwe as well as rodent faeces and algal blooms in the Okavango delta.

‘The bliss of a quiet period’: lockdown is a unique chance to study the...

- April 27, 2020 0
Peregrine falcons have swapped sea cliffs for the UK parliament and red-crowned parrots have left tropical forests in Mexico for the leafy neighbourhoods of...

Huge iceberg breaks off from shelf in Antarctica – video

Country diary: these rocks are all trying to tell us something

Tree of the week: ‘Like the haunted figure in Munch’s The Scream, he reflects...

- December 14, 2020 0
As I take my daily run, I always feel pleasure at the sight of this old sycamore, which despite his look of agonised vulnerability...

- May 8, 2020 0
Garden centres are preparing for a surge in plant and flower sales that could help salvage a catastrophic year for the horticulture industry. The UK's...
All rights reserved www.thepatrioticinfowars.com