Spider season is upon us. Cross spiders have strung sticky spirals of silken thread between shrubs and across the garden path, while missing-sector orb weaver webs bedeck my garage eaves. Noble false widows are lurking in every window and door frame, a gigantic house spider has taken up residence inside the hedgehog-feeding station beside my back door, and a trio of cellar spiders have crept inside the kitchen.

Perhaps, then, an eight-legged killer should have been top of my list of suspects when the desiccated corpses of common rough woodlice and common pill woodlice began appearing overnight in my downstairs cloakroom.

Mystery ensued for several weeks, until one evening when I switched on the light and caught the culprit mid-stalk. It was an arachnid – the woodlouse spider (Dysdera crocata). One and a half centimetres long, with a leg-span of about 4cm, it had a shiny, pinkish-grey, oval-shaped abdomen, amber-coloured legs and a conker-brown cephalothorax.

Its most striking feature was its disproportionately large mouthparts, perfectly designed to pierce an isopod’s armour-plated exoskeleton. In 2018, a photo of this infrequently encountered spider appeared in a viral meme, which proclaimed it to be a deadly new species spreading across the US, and fabricated a series of fatal bites. In truth, while the formidable fangs are certainly capable of biting, their venom isn’t harmful to humans, and typically results in mild pain and itching that lasts less than an hour. 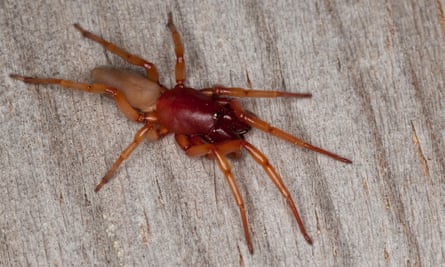 By day, the woodlouse spider holes up in a tent-like silken retreat, usually in a damp place beneath a rock, garden pot, log pile, or in leaf litter. When night falls, it emerges in search of wandering woodlice and, as I had discovered, sometimes ventures inside to dine.

Rather than relying on a web to trap its prey, this nocturnal predator is an active hunter. I watched as it crept along the skirting board on the tail of its unsuspecting quarry. Suddenly sensing danger, the woodlouse scurried across the open expanse of carpet, but the spider effortlessly chased it down. Powerful, forward-facing jaws clamped around the creature’s writhing body, one long, articulated fang puncturing the vulnerable underbelly, while the other penetrated the soft tissue between two body segments.

‘The aliens to watch’: how the humble earthworm is altering the Arctic

- August 25, 2020 0
They are a gardener's best friend, good for the soil and a treat for birds. But the humble earthworm may not always be good...

The Benefits of Mobile Point of Sale Systems

- April 13, 2020 0
If you've ever wondered about mobile POS systems, you're onto something great. POS systems have...

- May 18, 2020 0
A radical 10-year recovery plan for the UK food system should draw on local and community responses to the Covid-19 crisis to create a...

- May 30, 2020 0
Scientists and artists have used the drop in noise pollution during the coronavirus lockdown to create the first global public sound map of the...

- July 30, 2020 0
Five years ago, Volkswagen admitted to using software that ensured its cars were on their best behaviour when tested but could produce more pollution...
All rights reserved www.thepatrioticinfowars.com