Ingrid Albion has been helping to save whales and dolphins for three decades, but has never seen anything on a scale like this before. Nobody in Australia has.

Within the rugged beauty of Macquarie Harbour, a wild Southern Ocean frontier on the remote Tasmanian west coast, she has witnessed the biggest disaster of its kind seen in this part of the world.

Sometime overnight last Sunday, hundreds of long-finned pilot whales had become stranded in three spots inside and outside the harbour. Albion, a marine biologist and education officer with the state’s parks and wildlife service, was one of the first responders.

She found marooned whales thrashing about on a shallow sandbar just inside the heads, not far from the entrance known as Hells Gates, and lined up along a nearby ocean beach.

Distressingly, those inside the harbour were accompanied by their young offspring, known as calves. Small enough to avoid being beached, they circled the area singing out for their mothers and swimming up to the rescuers to bump their legs. It made for an overwhelming scene. 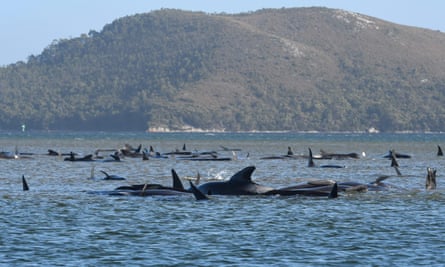 “As much as humans can understand, they’re definitely calling out to each other and it sounds like reassuring each other,” Albion says, as she clutches a cup of hot tea after recovering from an eight-hour day in the water.

“It really was a chaotic event, and if it’s your first time [at a mass stranding], there’s so many emotions. There’s dead whales, there’s live whales, there’s thrashing, there’s babies calling – there is a lot going on.

“It’s not like people start crying, but you can just feel that people are really bonding with that whale. You’re sometimes with those whales for a couple of hours … and it is like having an animal’s life in your own hands.”

Nobody is sure what brought the pilot whales in through Hell’s Gates. What is known is the alarm was raised in a phone call to police by a local early on Monday morning. 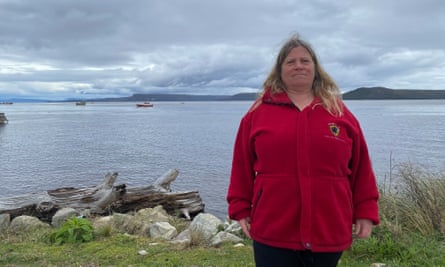 An initial estimate suggested there were about 70 whales stranded, but that quickly increased to 270 after assessments from the water and air revealed members of the pod were spread across three locations. By the end of Monday, marine conservation teams and volunteers were arriving from across the state, ready to launch a rescue campaign at first light on Tuesday.

By Wednesday, when roughly 200 carcasses were found adrift in the vast harbour’s tannin-stained waters and the death toll had leapt to about 380, it was clear this was Australia’s largest mass whale stranding on record, and among the worst recorded anywhere.

On Thursday, rescuers were focused on the diminishing number of survivors, racing to get as many back out through the heads using a technique involving harnesses attached to the side of small boats. Meanwhile, there was the issue of the carcasses, which could deoxygenate the harbour as they decomposed, suffocating local species, and attracting sharks through Hell’s Gates. 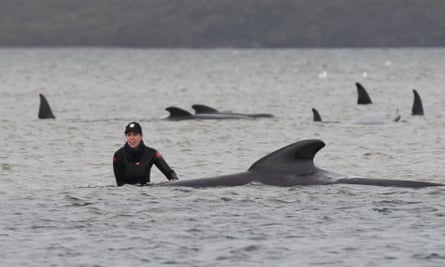 By Friday, the death toll was confirmed, including five that were too weak to be saved and had to be euthanised by gunshot. But there was also good news: 94 whales had been rescued, far more than authorities had expected at the start of the week.

Kris Carlyon, a government wildlife biologist, says it was an “absolutely fantastic” result given how much worse it could have been. “On Monday, as we were trying to come up with plans, if we’d said we’ll get 90 off the bar we would have been happy.”

Albion’s first job early on Tuesday was to tackle the whales at ocean beach. As the wind gusted and the rain fell, her first impression was that the 30 or so along the shore were already lost.

“We were driving the beach thinking we were looking at a group of dead whales but as we came to about whale number 10 it was lifting its head up,” she says. “That creates in you a sort of sense of ‘oh, I can do something, I can make a difference here’.”

Over the next few hours, as a team of about 20 worked to save a handful of surviving beached whales. Others focused on the hundreds stranded in up-to chest deep water on the sandbar, an operation that would continue for days.

For those in the water, the most urgent job was to right and stabilise the whales’ bodies, which can weigh up to three tonnes, to prevent them drowning. 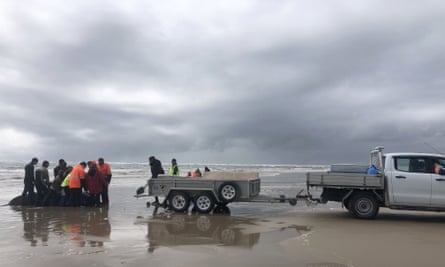 For those on the beach, it was to cool the animals by covering them with towels and slide mats beneath their bellies so they could be hoisted onto a trailer and driven to a release point from where they could swim back to the ocean.

Though a global beaching hotspot, Tasmania has not had a major episode for more than a decade. Albion first experienced a mass whale stranding and rescue in New Zealand about 30 years ago. For the past 25 years she has been responsible for training Tasmanian government staff and volunteers using inflatable dummy whales. For many, this was their first experience of the real thing.

“There’s a little bit of excitement and I think a lot of people felt overwhelmed because there were so many whales on the beach, but when you start focusing on a whale everyone’s just working together,” she says.

The rescue team across the week totalled about 100, including scientists, fish farmers, government officials and surf lifesavers. The mood late this week was a mix of exhaustion and sadness, but also quiet satisfaction at what had been achieved.

Some described the heartbreaking scene of freed whales being ushered towards the heads only to turn in response to a cry from another member of the pod and strand themselves again. About 10 of those ferried out beyond the heads re-beached themselves overnight on Thursday.

For Tony van den Enden, chief executive of Surf Lifesaving Tasmania and overseeing a rotating team of about 40 volunteers, the rescue operation was an emotional rollercoaster – at once distressing and exhilarating.

“It’s surreal,” he says after returning from the sandbar on Thursday. “You’re obviously seeing how gentle and large these creatures are, and while they are in so much distress they almost seem to know you’re trying to help.

“To be able to help when they are so vulnerable is humbling in a way, but also gives a sense that you’re trying to make a difference.” 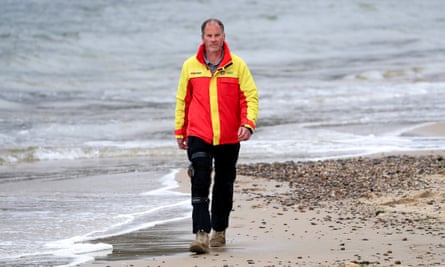 But the scene at Macquarie Heads late on Friday remained undeniably grim. Seven more whales had been freed, but the view from the boat ramp was sobering: a sandbar turned into a makeshift morgue, with scores of lifeless bodies half-submerged across the sandbank.

Scientists said it was unclear what had drawn them into the harbour, but there was no suggestion it was anything other than a natural tragedy.

Pilot whales are an ocean going species that – despite their name – are a member of the dolphin family. They travel in large pods and are prone to mass strandings when they get too close to shore. Feedback from the coastline can play havoc with their echolocation – clicks and other sounds they use to communicate and orient themselves when swimming in a pod, or chasing fish deep in the ocean. Theories included this pod may have come unusually close to the shore to feed before getting into trouble.

Authorities were still weighing what to do with the bodies, but leaning towards an ocean disposal – dragging them out past the heads and slicing through their blubber to help them sink.

As for the survivors, it was hoped they may reform into a smaller pod and avoid a repeat stranding. “Ideally they will re-group,” Carlyon says. “They will reform those bonds and get on with things. This is obviously a stressful event for them. But we’re hopeful.”

Spring promises: things to look forward to, from chocolate bunnies to flower-filled walks

Green homes: how to shut out the winter cold and save cash

How creating wildlife crossings can help reindeer, bears – and even crabs

Country diary: blackbirds feast on the food of the gods

- January 16, 2021 0
Langstone, Hampshire: A rare sight in British gardens, persimmons have a waxy, smooth-skinned appearance of oversized tomatoes When my neighbour, a keen plantsman, moved...

- June 23, 2020 0
Investors managing trillions of dollars in assets have warned Brazil that escalating deforestation and the "dismantling" of policies to protect the environment and indigenous...

In the early days of Covid-19, we stopped consuming and rather loved it. But...

- January 22, 2021 0
In April of last year, Australians stopped spending – but where some label current highs in consumption as ‘recovery’, Sarah Wilson sees a cultThis...

Lemon juice, legumes and local activism: what green habits have you adopted in 2020?

- October 11, 2020 0
Embracing the good life with sustainable eating We started to order food from the local store for curbside pickup. We went online and bought a...

- August 27, 2020 0
King George II is said to have described the British summer as, "three fine days and a thunderstorm". Today, in our climate changed times,...
All rights reserved www.thepatrioticinfowars.com