The river at the bottom of our garden is like a gigantic rain gauge. Normally it is a humble tributary, lurching past the garden almost grudgingly, with its head down, with barely the current to stir the duckweed. But after the deluges of the past few days, it has morphed into a confident swirl.

Two things always happen when it gets into its macho flow. The first is that the otter appears, as it did today. The strength and heft of the main River Stour across the fields is perhaps a deterrent, a little too tiring for fishing, so the otter re-routes to our more manageable stretch. The other event is that our kingfishers vanish.

Until recently the tributary has been a kingfisher highway. The pint-sized rockets of electric blue have been whizzing past every few minutes, making observation a little like a slowed down tennis match, head turning one way, then the other. The local pair had a brood, and several youngsters have used the backwater for training. They need it, too. Peering down into the sleepy shallows, they learn to adjust for refraction, to compensate for wind and rain, and figure out where the minnows like to hide. But their apprenticeship has been rudely interrupted by the floodwater. 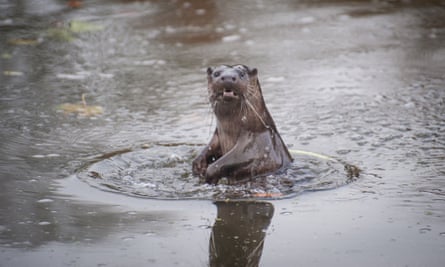 The river’s hissy fit has unsettled the social cohesion. There are fewer comfortable spots to fish, and those are taken up by territorial adult kingfishers and a few domineering youngsters. For several weeks we have seen skirmishes, individuals laying claim to their own stretch, as anglers often do. The kingfishers chase and jostle with iridescent incandescence, in deadly earnest, because a winter territory is a significant prize. Now that the first floods have come, the losers are being evicted and must take their chances elsewhere. Sometimes, apparently, siblings leave town together.

Displaced kingfishers settle by lakes and marshes, and down here in Dorset a significant number also find their way to estuaries and coasts, where they look decidedly incongruous on seawalls and jetties. It’s a harsh reality that many don’t survive. Now that the torpor of early autumn has gone, we won’t see many more kingfishers on our stretch. We’ll miss them – and fear for them, too.

‘Worst work in the world’: US park rangers grapple with tide of human waste

- December 2, 2020 0
With toilets in short supply, ordure can harm streams and wildlife. An entrepreneur has a nifty solutionFor 20 years, Richard Lechleitner had a grueling...

- August 13, 2020 0
A nest of arm-sized sticks built on a precipitous crag by an octogenarian conservationist dangling from a rope has enticed a pair of golden...

- April 13, 2020 0
Wildfires in Ukraine have spread to just over a mile from the defunct Chernobyl nuclear power plant and a disposal site for radioactive waste,...

A taste of honey: how bees mend fences between farmers and elephants

- August 12, 2020 0
Watchtowers in trees, tripwire alarms, radio collars, chilli smoke and beehive fences: scientists and conservationists across Asia and Africa are coming up with safe...

Lemon juice, legumes and local activism: what green habits have you adopted in 2020?

- October 11, 2020 0
Embracing the good life with sustainable eating We started to order food from the local store for curbside pickup. We went online and bought a...
All rights reserved www.thepatrioticinfowars.com