As the sunlight pierces the fog, a fisherman on a boat floating along the Gandak River in Bihar, India, spots a magnificent reptile basking on a sandbar in the middle of the river. Most people would mistake it for a crocodile but its distinctive snout tipped with a bulbous mass and elongated jaw tell him it is a gharial.

Gharials (Gavialis gangeticus) are often mistaken for crocodiles or alligators. They are the only species in the Gavialidae family: river-dwellers that eat only fish and some crustaceans, and which split from all other crocodilians perhaps more than 65m years ago.

There was a time when gharials were commonly found in the riverine ecosystems of the Indian subcontinent – in Pakistan, Myanmar, Bangladesh and Bhutan. But the population is estimated to have declined from up to 10,000 individuals in 1946 to fewer than 250 in 2006, a drop of 96%-98% within three generations, relegating them to the critically endangered category on the International Union for Conservation of Nature’s red list.

But today, thanks to concerted conservation efforts, there is a glimmer of hope for the gharial, which is now found mainly in India and Nepal.

Those efforts began in the 1970s, when the Indian government initiated a crocodile breeding and management project with the support of the UN’s development programme and Food and Agriculture Organization. The National Chambal Sanctuary was established in 1978 and the following year the first captive-bred gharials were released into the Chambal River, which cuts through ravines and hills in the three states of Uttar Pradesh, Madhya Pradesh and Rajasthan. By 1992, the gharial population had increased to 1,095 individuals. 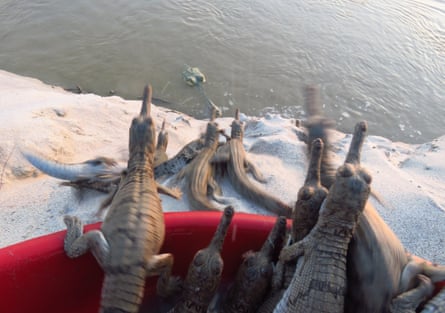 Despite setbacks – in the winter of 2007, more than 100 gharials were found dead because of gout, caused by toxins in the water – today the Chambal River still holds the largest population of gharials, with about 1,800 according to government estimates.

The success of the Chambal project is now being replicated in Bihar. After 15 male and female gharials were observed on the Indian stretch of the Gandak River – which flows down from Nepal into India – in 2010, the Bihar government initiated a Gandak gharial recovery project. To reinforce the remnant gharial population in the river, captive born and reared gharials were released into the Gandak from 2014 to 2015, under a joint project with India’s Environment and Forest Department and the WTI.

The Gandak is an ideal habitat for gharials with its sandbanks and wetlands, which are good breeding grounds for the fish on which they feed. “One of the exciting parts of the exercise was taking around 30 juvenile and sub-adult zoo-bred and reared gharials from the Patna zoo to the Gandak River for reintroduction,” says Prof BC Choudhury, a trustee of the WTI. “Radio as well as satellite transmitters were fixed to a few released individuals to track their journey.” 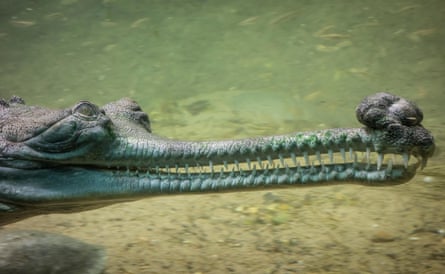 From 2016 onwards, nests were located every year with the help of local fishermen and farmers. The nests were protected against sand erosion and predators, and local nest watchers were deployed. “Members of the fishing community were trained to observe gharials and track their nesting behaviour,” says Samir Kumar Sinha, head of conservation at the WTI.

When male gharials reach sexual maturity, around the age of 10 or so, they grow a bulbous growth on the tip of their snout that resembles a pot. It is from this ghara – the Hindi word for a type of earthenware pot – that gharials got their name. Females lay eggs in pitcher-shaped burrows in sandbanks and on the beaches of river islands, where they guard them from predators. If danger appears, the fathers may enter the burrows to protect the family group. After about 70 days of incubation, the eggs hatch into foot-long babies.

Several factors have contributed to the decline of the gharial population. Many get entangled in fishing nets or ensnared by hooks laid by turtle poachers. They are also hunted for their skin and as trophies, and for use in traditional medicine. Illegal sand mining from riverbanks destroys the gharials’ habitats and nests, forcing them to abandon their preferred basking sites. Basking is important for thermoregulation in the species.

One of the biggest threats is the unfettered use of dams and sluice gates, which when opened flood the downstream tributaries, eroding the riverbank in stretches, and washing away the gharials’ eggs.

In 2018, the State Wildlife Board accepted the WTI’s recommendation to declare 140km (87 miles) of the Gandak River as a conservation reserve, according to PK Gupta, Bihar’s chief wildlife warden. “This not only helps in the recovery of gharial populations in this stretch of the river, but also other riverine ecosystems,” he says.

Sinha says: “In March, we carried out a survey and the number of gharials came to 260, now it will grow further.” In June, 86 newly hatched gharials were released into the river after a successful incubation of 65-70 days in the nests watched over by members of the local community.

Choudhury says: “Gandak River in Bihar has about 7%-8% of the global adult population of gharials in the wild, and we are proud to have been instrumental to make this happen. What we visualise is that the Gandak will perhaps become the second most important wild gharial breeding location in the country, after the Chambal River.” 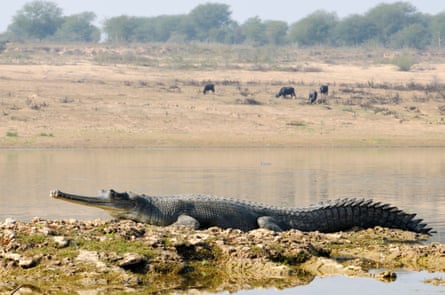 Despite being about 16ft (4.9m) long and some of the heaviest reptiles on Earth – weighing in some cases up to 680kg (1,500lb) – gharials are typically shy, and hide from humans, so are not always easy to spot.

But increasingly more are being discovered in other parts of India and Nepal. Two gharials were spotted in the Kosi River in Bihar in 2019 – the first time in about 50 years. In the same year, scientists from the Zoological Society of London found baby gharials in a remote region of Nepal after nearly 30 years of absence, and this year gharials were spotted in the Yamuna River.

Gharials are still critically endangered but as conservation efforts continue, there is hope that their numbers may continue to grow.

Find more age of extinction coverage here, and follow biodiversity reporters Phoebe Weston and Patrick Greenfield on Twitter for all the latest news and features.

‘We will not stop’: pipeline opponents ready for America’s biggest environmental fight

- April 17, 2021 0
Covid has transformed the way many of us work and that includes the people who look after our mental health. For much of lockdown,...

Country diary: you won’t beat the hare at hide and seek

- May 26, 2021 0
Sandy, Bedfordshire: Even at a distance, this wily animal senses our movement before we see it, and signals that any chase would be futileThose...

- June 13, 2021 0
Since long before the steel-hulled fishing boats from foreign countries arrived in the South Pacific its people have had their own systems for sharing...

- October 1, 2020 0
Fires in Brazil's Amazon increased 13% in the first nine months of the year compared with a year ago, as the rainforest region experiences...

Israel’s ibex make the most of lockdown – in pictures

- January 22, 2021 0
Nubian ibex have been roaming the empty streets of Mitzpe Ramon as Israel’s coronavirus lockdown extends to the end of the month Continue reading...
All rights reserved www.thepatrioticinfowars.com