The Silverado Trail, a two-lane road that weaves through the bucolic hillsides in the heart of California’s wine country, is the quintessential vision of Napa Valley. Home to dozens of wineries, it is a destination within a destination – one that welcomes both vacationing imbibers and oenophiles from around the world.

But recently the amber hillsides have been laced with the ashen aftermath of wildfires that have torn through the region, leaving behind charred rubble that is fast becoming as much a part of the landscape as the neatly trussed rows of vines.

It is a sign of an increasingly uncertain future for the crown jewel of California’s $43bn wine industry – one in which vintners must adapt to a changing climate and increasingly unpredictable fire seasons in order to survive.

Devastating wildfires have pummeled Napa and Sonoma over the last five years, most recently this summer’s Glass fire, which torched close to 67,500 acres and destroyed 1,555 structures, including damage to numerous wineries. Annual evacuations, smoke-filled skies and the existential threat posed by higher and drier temperatures have taken a toll. This year Covid-19 has compounded the impact on tourism, restaurants and labor, with losses from the crisis expected to total close to half a billion dollars. 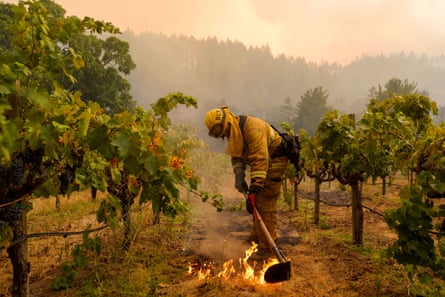 Yet even with the risks, California’s wine industry is growing, with the market rising roughly 42% in retail value over the last decade. Napa has attracted a steady flow of newcomers who may not be willing to withstand the obstacles ahead. But many winemakers and growers, some with generational ties to the region and its industry, are counting on research, innovation and sheer determination in a race against the changing climate.

“We are resilient,” says Nicole Bacigalupi who runs Bacigalupi Vineyards with her twin sister, Katey. 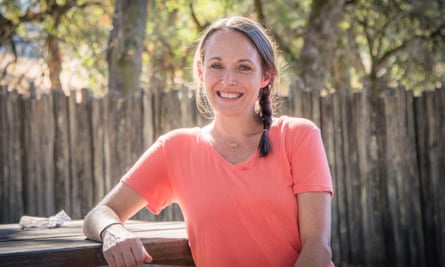 Bacigalupi, the third generation in her family to farm the land, is finding ways to mitigate the threat of fires. Speaking under a giant oak tree, the sound of cow calls ring out from an adjacent pasture. The animals are there to help keep the vegetation down.

The vineyard is also building its own fire truck, she says, adding that a friend helped protect them when the Walbridge fire, which morphed into the sprawling LNU Lightning Complex fire, got close last month.

Bacigalupi admits that three terrifying fire seasons in a row have prompted tough questions about the future.

“You get to a point where you are so overwhelmed that you are not sure if it’s worth fighting for,” she says.

Winemaking in the era of wildfires

Since 2015, California Alcohol Beverage Control has received roughly 170 new wineries registries a year – up from roughly seven registered annually in the 1990s. Some critics have called for crackdowns on the continuing expansion, and have concerns about how crowding affects safe and sustainable land use practices, especially in the face of faster-moving flames.

“It has gotten to the point of absurdity now, there are so many wineries in that little valley,” says James Conaway, the author of Napa: The Story of an American Eden. “Global warming is here and the changes are not going to turn around in anybody’s lifetime,” he adds. “Napa is going to have to alter what it is doing.” 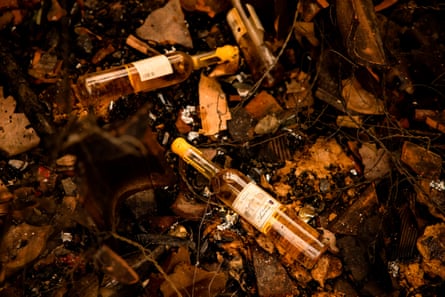 He champions the idea that newcomers might move out, and make room for those most dedicated to sustainable winemaking. “Some of the people who have been there a long time are doing it – there are some really nice wines still being made in Napa,” he says. “But, it is not the nice sociable agrarian dream that it was back in the 80s.”

Kirk Venge, a third-generation veteran of the wine industry who was born and raised in Napa Valley, is optimistic, and says he’s not going anywhere. “We just have to be patient and not give up,” he says with a smile during a bustling day on his namesake vineyard, Venge, housed on the Silverado Trail. He has faced the dangers of Napa Valley’s new normal up close.

Global warming is here, and Napa is going to have to alter what it is doing

On this sunny afternoon in October, it would be hard to tell just how close the Glass fire came to his property, were it not for the surrounding scorched hillsides. Venge describes watching embers rain down from the sky and treetops and explode on the horizon, feeling certain he’d say goodbye to his winery that morning.

“The whole valley was starting to go up,” he says, pointing at the blackened landscape.

But his vineyard was spared and within hours, Venge and a small crew got back to work. “We have to keep making the wine,” he says. “People depend on us for their livelihood and we can’t just stop, we can’t run away.”

Now, he’s better preparing the property by increasing its “defensible space” – areas without debris or vegetation that can serve as a natural fire break. “No more bark around the building!” he laughs.

Venge is also dealing with another major challenge – the effects of persistent wildfire smoke, which is dangerous for workers to breathe and can also be absorbed by the grapes, altering the feel and flavor of the wine produced from them. A 2015 study by the Australian Wine Research Institute found that just a half-hour of smoke exposure was enough to have an impact. This year, some areas were cloaked in the grey haze for weeks on end. 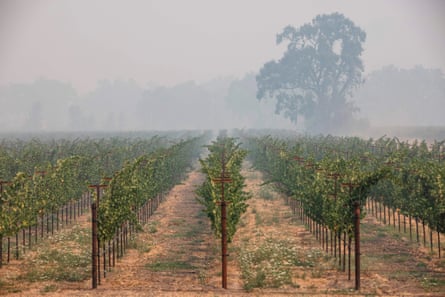 “Smoke taint” has affected harvests in Napa already after bad fire seasons, and this year’s was no different. Venge says he lost more than two dozen tons of grapes as a result. “We didn’t pick any pinot this year at all,” he says. “Anything picked after the Glass fire is going to have smoke taint.”

To make up for the loss, Venge and his team are getting creative, replacing the unusable year with new products from the 2018 and 2019 stock, and hoping they are spared in 2021.

California’s wine country has always been disaster-prone, the land primed for floods, fires and earthquakes. Now, with winemakers around the world facing similar climate-related issues, the region is looking elsewhere for answers.

California has already benefited from lessons learned in fire-prone areas such as Australia and Chile. Resources are being shared up and down the west coast – Oregon and Washington are dealing with the same threats – and the winegrowing associations are collaborating on a taskforce to study smoke taint. There are also robust research centers based locally, including UC Davis, where viticulturalists are working to develop more resilient vines, and Sonoma State University, where there are studies into strategies for better sustainability and risk mitigation.

“The one thing we know about California farmers and ranchers – and I view the wine sector as a real leader in this – is they are all trying to look around that curve and trying to get ahead of that curve,” says Karen Ross, the secretary of the California department of food and agriculture, who also spent more than a decade serving as the president of the California Association of Winegrape Growers, and helped usher in a sustainable winegrowing program.

Ross admits that the effects of the climate crisis have descended on the region sooner than anticipated. “We have always talked about these kinds of impacts as the future – but the future is now,” she says, adding that Golden State growers are relying on research and science to navigate new obstacles. “It may look different but I think it will still be an important and leading part of what California agriculture is all about.” 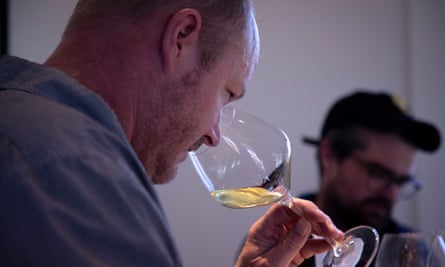 Still, there is a long road ahead, and adjustments will have to be made quickly. Already, winemakers are predicting warming weather will mean the end for some wines in the region in the future, including favorites like pinot and chardonnay. Even cabernet, the valley’s most prized varietal, is under threat from the changing climate.

Because vines can take years to cultivate, the wine business is by nature future-facing, but Dr Judith Ford, a sustainability and resilience fellow at Sonoma State University hopes the latest fire season spurs a sense of urgency.

Talk is cheap when it comes to climate action. Now the government must deliver...

- December 12, 2020 0
Despite Boris Johnson’s pledges, the UK is way off course on its path to net zero emissions. It’s Labour’s job to force the issue•...

- August 20, 2020 0
The problems began the moment Captain Boris Prokoshev set sail aboard the MV Rhosus in 2013. He discovered that the ageing Russian-owned cargo ship, bound...

- June 29, 2020 0
The US is to join with other major powers including China, India and the EU in formulating plans for a global green recovery from...

Storm Francis hits the UK and Ireland – in pictures

- May 1, 2020 0
Strengthening environmental regulations must be a key plank of the UK's recovery from the coronavirus crisis to help prevent the spread of future pandemics,...
All rights reserved www.thepatrioticinfowars.com