Denmark’s prime minister has admitted the massive mink cull she authorised last week was illegal, as opposition parties called for the resignation of the agriculture minister who has been overseeing the policy.

Mette Frederiksen announced last week that all the country’s mink would have to be culled due to fears that a Covid-19 mutation moving from mink to humans could jeopardise future vaccines.

On Monday, however, after political opposition to the cull emerged, the Danish government dropped an attempt to pass the emergency legislation that would have underpinned the cull order. Answering questions in parliament on Tuesday, Frederiksen rejected accusations she had known last week’s cull order was illegal. “We were informed of the illegality [this] weekend,” she said.

Frederiksen urged calm and said the priority was to “to guide Denmark through the pandemic as well as possible”.

The cull had already begun, and, according to a spokesperson for the Danish food and environment ministry, continues in the infected zones. Outside the infected zones, he said, the cull continues with farmers who wish to cooperate. The ministry is charged with leading the cull.

The official tally of culled mink stands at 2.5 million animals, although a spokesperson for the Danish police, who are helping with the cull, said the latest figure was probably higher.

Denmark’s agriculture minister, Mogens Jensen, had already apologised for his handling of the cull on Monday. “We have made a mistake. There were no legal grounds to ask the farmers to cull their mink outside the infected zones,” he told the Danish wire agency Ritzau.

Critics, including the chairman of the Danish People’s party, Kristian Thulesen Dahl, have called for Jensen’s resignation.

But support for the cull’s continuation came from other quarters, including the business sector and welfare campaigners. 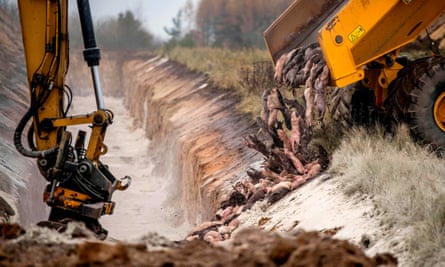 In a statement to the Guardian the confederation’s international policy director, Peter Thagesen, said the cull was sad and difficult, but that the “government and businesses are working together to limit the spread of Covid-19, and so far our [virus containment] strategy has proven very effective”.

He added that mink farmers had “worked for centuries to build their businesses … [and it is important] they will be compensated according to their loss”.

Warnings of further mutations, as well as support for the cull and adequate compensation agreements, came also from Denmark’s State Serum Institute, the public health body advising the government.

“We know there will be more mutations,” an SSI spokesperson said. “We had five already. The [mutated] infection is not the worry, it is not harmful. It is the risk the mutations have for vaccines and antibody treatments.”

For farmers outside the infected zones, like Nicki Lobner, confusion is making a difficult situation worse. In an interview with the Danish Broadcasting Corporation, Lobner said it had been a “rollercoaster ride, and it’s not a nice place to be”.

“One minute we have hopes we can keep some animals because we’re in the non-infected zone. The next minute we’re told we can’t. We simply must find out what we can and cannot do,” he said.

Birgitte Damm, policy adviser and vet with NGO Animal Protection Denmark, said that without the cull there would be “continued daily spread of the Covid-19 virus among mink farms and an ever-increasing virus reservoir as long as the mink are not culled”.

Damm said gassing was a highly problematic method of killing and urged farmers and authorities to do all they could to follow the correct procedures, despite the “scale and haste”.

Sign up for the Animals farmed monthly update to get a roundup of the best farming and food stories across the world and keep up with our investigations. You can send us your stories and thoughts at [email protected]

Next – a hedgehog snuffling! The lockdown lifeline capturing the sounds of Britain

Sinking billions of taxpayer dollars into gas would make Australia an international pariah |...

- August 21, 2020 0
On 25 March the prime minister launched his commission into our post-Covid economy. Neville Power, board member of a gas company Strike Energy was...

- November 7, 2020 0
Axminster, Devon: It is not known who planted this tree and why, but its beauty is offered free to everyone who passesThere is a...

- May 1, 2020 0
A simple technique to "illuminate the exits" in trawl fishing nets can almost halve the numbers of unwanted catch, new research has found, potentially...